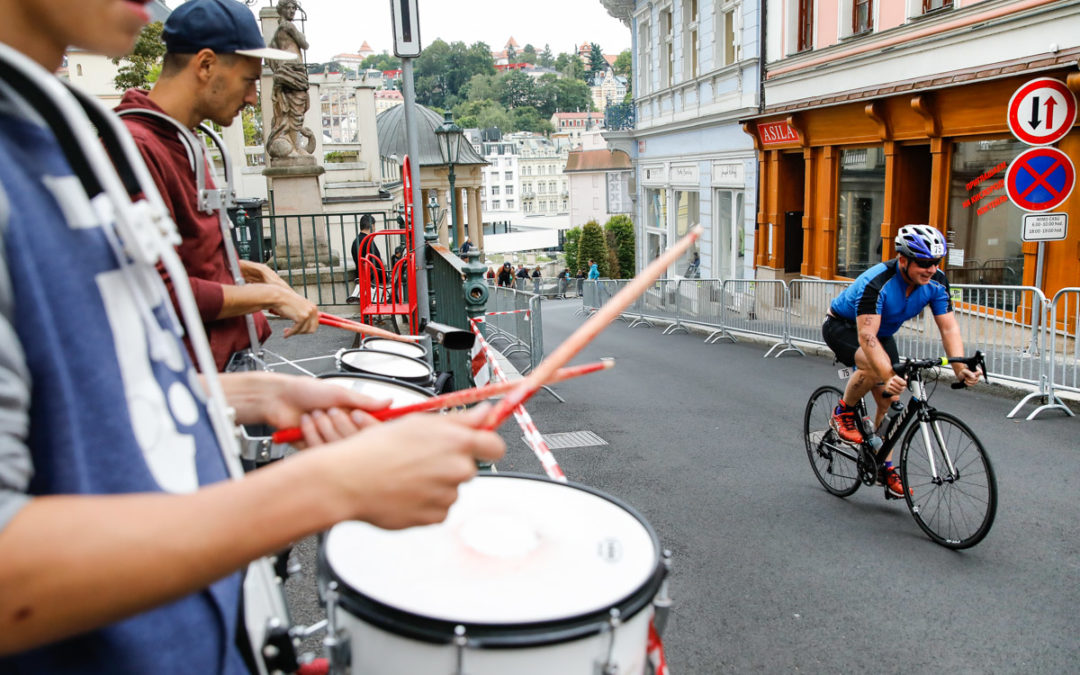 The beautiful spa centre of Karlovy Vary will stage the most prestigious triathlon races in the Czech Republic on August 23-25. Participants of the ITU World Cup and non-professional sportspeople and children will be heading for West Bohemia. All these competitions will be included in the busy schedule of the CITY TRIATHLON Karlovy Vary.

To the most charming colonnades. To the Geyser spring. To the Imperial Spa House. And especially to the Theatre Square, where the finish area with a large stand will be situated. The event called CITY TRIATHLON Karlovy Vary will take triathletes and fans to the most impressive venues of this West Bohemian town. Enjoy them, too!

„We aim to organize our event for professional as well as non-professional triathletes, for fans and families with children. We wish to show them the best of Karlovy Vary and to prepare a programme entertaining them the whole weekend,“ says Vladimír Malý, race director.

Start with your children

The programme will be opened up with the Czech Pupils´ Cup on Friday afternoon. These races for age groups 8-15 will be held in the Leisure Time Areal Rolava and its immediate vicinity. The same venue will be hosting GEIS Baby Duathlon, a fun morning for the smallest sportspeople and their parents. The duathlon races are composed of run – bike (pushbike) – run and they are designed for kids between 1 and 12 years of age. Children can also join their parents in a special relay and share a common experience. There will be no starting fee.

Enjoy the most beautiful race course in the world

The PSG Age Groups races, part of the Czech Triathlon Cup and an open race for absolute amateurs, will start at the Rolava Lake as well. Annually, there are about several hundreds of them present at the start. 750 m swimming, 20 km cycling and 5 km running mean an impressive sport challenge, which is possible to reach by ordinary, hobby triathletes. Those who do not dare to choose the whole race course can build a relay with their colleagues or friends.

A fantastic sports experience ahead. You can look forward to the facilities, conditions and courses, which will be available for world cup professionals one day later. After the swim section in the Rolava Lake, triathletes will ride to the centre of Karlovy Vary, complete three laps round the Thermal Spa Hotel, Geyser and other beautiful spa town locations. It is worth mentioning that the local race course is considered the most beautiful one in the whole world cup calendar.

„In comparison to the last year´s running course, this year it will be altered as barrier-free and it will lead to the other charming locations, such as the Grandhotel Pupp, the Imperial Spa House and the Studánka (Well) spring. A unique experience will be awaiting in the finish line on the Theatre Square,“ explains Vladimír Malý.

From a race directly for a concert

After the race and the awarding ceremony are over, the Theatre Square will change into a party zone – a concert performed by the Hamleti band will start at 7:30 pm. The band members are actors and speakers, namely Dalibor Gondík, Aleš Háma, Jakub Wehrenberg and Hardy Marzuki. You can celebrate your success at the PSG Age Groups race, you can recover before Sunday´s World Cup or simply enjoy a pleasant summer evening in the beautiful scenery.

Cheer up the best triathletes

Sunday´s World Cup will surely be a programme highlight. It will attract the best triathletes from around the globe to Karlovy Vary. They will compete for points in the Olympic qualification and for the prize money at the amount of 60,000 US dollars. We can look forward to thrilling races during which Czech national team members will be fighting for medal podium, too.

To provide the best conditions for fans who should not miss any moment, there will be a bus connection between the Rolava Lake and the town centre. The Imperial funicular will also be integrated in the transportation system. The Theatre Square will be the centrepoint of the race with the second transition area, the finish line, a 60-metre-long stand and an LED screen with live broadcasting of the race.

You can also watch Czech triathletes on TV – Czech TV Sport channel will have direct broadcasting inputs from the ITU Triathlon World Cup.

More information about the 2019 CITY TRIATHLON Karlovy Vary 2019 can be found at:
www.citytriathlon.cz
www.facebook.com/Citytriathlon.cz

Do you agree with our cookie usage? We use those to make the site easier to use and to measure traffic. We share analytical info with our partners.
SettingsAllow necessaryAccept all
Manage consent