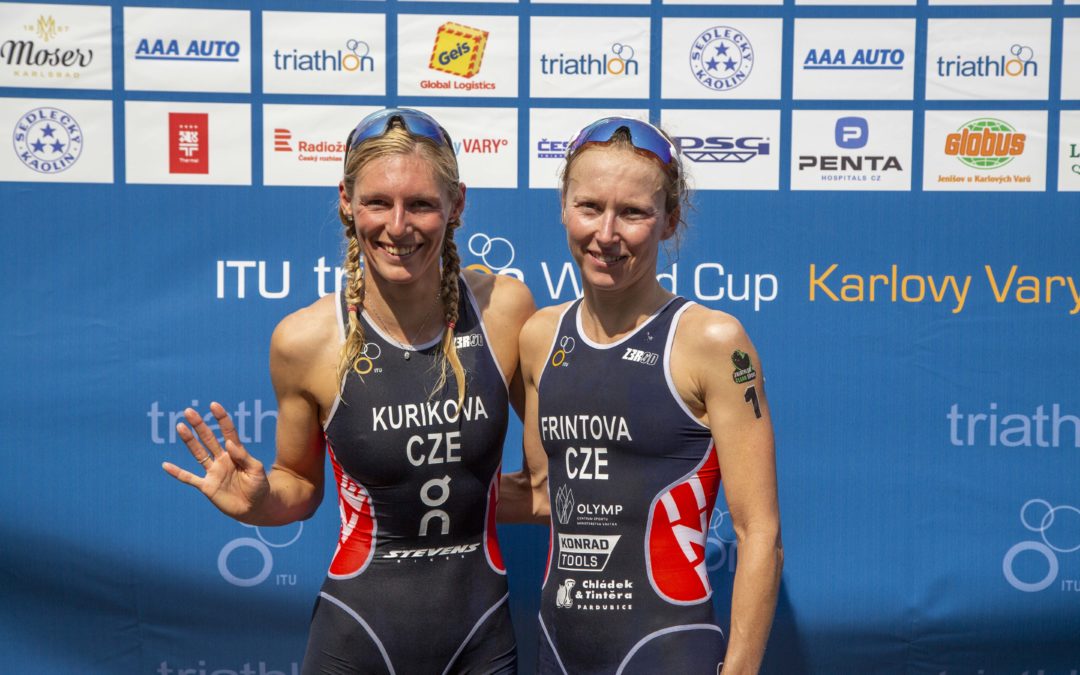 For triathlon fans, it must have been a perfect race. They enjoyed a magnificent ambience of the spa town, sunny weather conditions, a starry start field, including four Czech triathletes and mostly a dramatic race from the start to the end! The breaking point came after 1500 m of swimming and 40 km of cycling in the very last discipline: 10 km run.

Vendula Frintová left water on the 16th place with loosing half a minute to American Tamara Gorman. Petra Kuříková was only three seconds behind her. Tereza Zimovjanová came out of the Rolava Lake another nine seconds later. All of them joined the second cycling pack which reached the city centre with a 30-second gap to the leaders. The last Czech was Iveta Fairaislová, who departed the first transition area on the 38th position loosing 1:44 minutes.

The positions were changing rapidly on the difficult cycling course in Karlovy Vary. Frintová and Kuříková caught up with the leading group whose speed was acceptable only for the best triathletes. Frintová lead a 14-member pack into the transition area 2. Her fall at the transition entry scared the spectators a bit. „I simply rammed in,“ she was smiling at the finish line later. „At the very last moment I started to break, my bike slipped a bit and I ended up on my knees. Luckily, all finished well. Only two opponents passed by and I did not receive any penalty which could have happened.“

The very first running lap was decisive for the latter leaders and medallists. Frintová and US Tamara Gorman took the lead. „I have no idea why today I was not in a good running shape. I was happy I could run with Tamara, who is a very good triathlete, the U23 world champion. I managed to save some energy and power,“ Frintová said.

In the very end, the Czech triathlete attacked the leading position. When entering the finish she „jumped off“ from her American opponent and completed the race first at the finish time 2:09:08. Gorman finished four seconds later. „. I intended to attack in the very last metres. If you do not feel in an ideal shape, it makes no sense to sprint on a longer distance in front of the finish line.“

From the very beginning, Petra Kuříková was fighting for the third place with German Caroline Pohle. Most of the course Kuříková was ahead of her. German triathlete, however, fought back for the bronze medal in the final 2.5 km lap. „If someone had tol dme that I would rank fourth, I would be enthusiastic about it. Since I was third most of the running course, I am slightly disappointed,“ the Czech triathlete said. Kuříková hereby collected a significant amount of points necessary to make her Olympic qualification dream come true.

For the overall results please go to

Do you agree with our cookie usage? We use those to make the site easier to use and to measure traffic. We share analytical info with our partners.
SettingsAllow necessaryAccept all
Manage consent