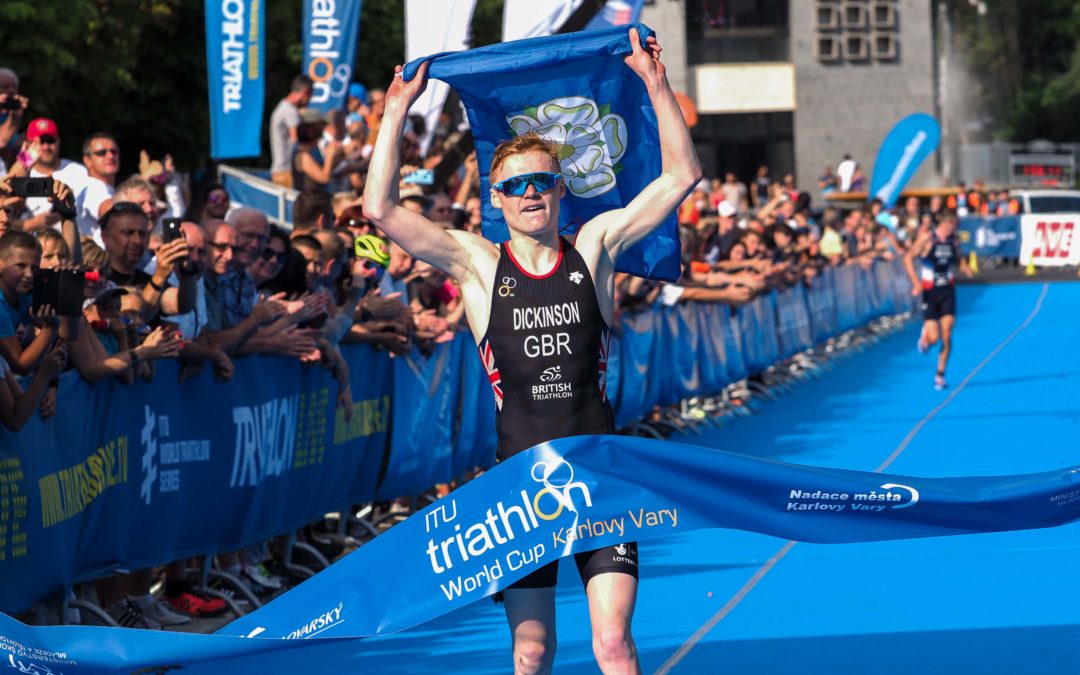 The world triathlon powers dominated in Karlovy Vary at the ITU World Cup on Sunday, August 25. Samuel Dickinson was the fastest in the male category. French Raphael Montoya and another British triathlete Grant Sheldon completed the podium. Jan Čelůstka ranked 20th to become the best Czech in the race.

In the morning, Czech fans celebrated the local favourites Vendula Frintová and her gold medal and Petra Kuříková, who ranked fourth.

In the men´s race, the Czech Republic was represented by four triathletes: Jan Čelůstka, František Linduška, Jan Volár were joined by Lukáš Červenka, who was waitlisted until then and definitely feeling tired after Saturday´s Age Group race victory.

At the beginning of the 40-km cycling course, during which triathletes had to climb the steep Chateau Hill seven times, the fastest swimmers merged into a big pack numbering 30 riders. For a long time, all the Czechs could keep up. The first ones to lose contact were František Linduška and Lukáš Červenka with several minutes´ gap. Saturday´s start in the PSG Age Group race took a toll on Červenka, who did not finish the running section.

In the lead a British-French trio broke away. For some time the Dutch Van Egdom keept pace with them but later in the running segment he started to trail behind. In the last lap, the trio fell apart leaving the British Samuel Dickinson in the lead to the finish. His finish time was 1:56:12.

„It has been my first race in Karlovy Vary and I am truly glad I came here because the beautiful but difficult cycling course had been challenging for me. The running segment was not so fast but in this heat it was a real challenge for each single one of us. I am happy that I have saved most power to the finish and that I have won,“ he was smiling after the race.

Frenchman Raphael Montoya finished second losing 12 seconds to the winner and the bronze medal will go to GB´s Grant Sheldon 30 seconds behind him.

The best running performance of all the Czechs was presented by Jan Čelůstka, who finished 20th losing 2:57 minutes to the leaders. „ I am not happy with the results. I wanted to be in the top15. On the hand, I was enjoying the race thoroughly. A marvellous weather, a great race course and fabulous spectators who were cheering us up. From this point of view it was simply perfect,“ continued the best triathlete in the start field.

Jan Volár finished on the 33rd place. „It was not a race as I had imagined it to be. However, it was a great race with a magnificent course, drummers and people whom I want to thank for firing me forward. It was fantastic,“ he confirmed in the finish area.

For the overall results please go to