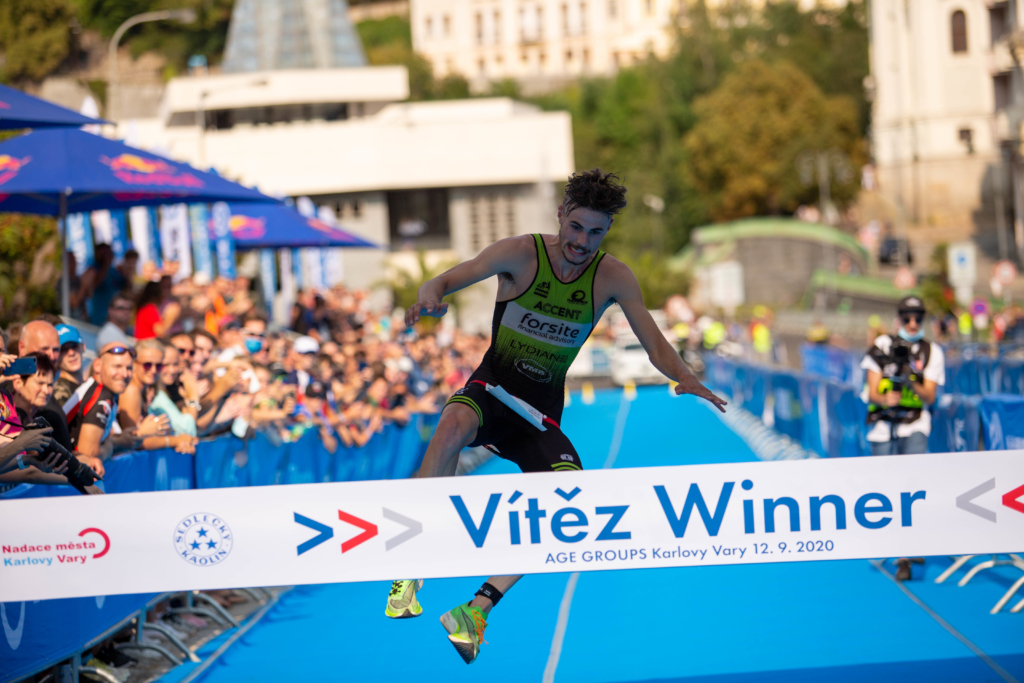 An excellent prologue to the ITU World Cup was staged as the Czech Cup on Olympic and sprint triathlon distances on Saturday, September 12. Belgian Matthys and Czech Grabmüllerová could rejoice over their victories at the CITY TRIATHLON Karlovy Vary.

The same, beautiful race courses and the identical professional venues like for Sunday´s World Cup was ready for all the participants of the Age Groups races, part of the Czech Cup. Only there were half the distances: 700 metres´ swim in the Rolava Lake, 20 km bike course in the spa centre with 3 demanding laps and climbs to the top of Chateau Hill and the final running section of 5 km.

With regard to the high number of participating athletes, they were divided into two waves – 39 and younger and those aged 40+. The first group was fighting for victory in a bunch, including Belgian Dries Matthys, Lukáš Červenka, Tomáš Kříž, Filip Michálek, Filip Václavík and Filip Tlamka. „Matthys tried to jump off in the very first lap and then, it was his solo ride. I did not want to chase him because my goal was to save up some energy for Sunday´s World Cup, ” Radim Grebík depicted the situation.

A group of four – Červenka, Olšar, Michálek and Grebík – entered transition area 2 on the Theater Square. Grebík was the fastest runner of all of them in the end and he secured the second place. He lost 22 seconds to Matthys. Filip Michálek ranked third.

A winning comeback to the Czech Cup

In the women´s category, there were two ladies who existed the water first, namely Kateřina Mičková and Belgian Kiara Lenaertz, followed by a few seconds by the local Heidi Juránková and Aneta Grabmüllerová, who returned to racing after a long break.

„In the bike section all four of us got together. Later Israeli Aviv Levi joined us. I could see that the girls were not as strong in their technique and some of them really suffered going uphill, more than I did. I succeeded in jumping off with the Belgian and the Israeli. Unfortunately, Katka Mičková had some technical problem,” Aneta Grabmüllerová characterized the bike section. “Surprisingly enough I was running faster than the others. The only one who kept the pace was Heidi Juránková. She was approaching. At one moment I was losing about ten metres. But I managed to keep the gap between us,” the winner was smiling at the finish line.