World Cup in the light of superstars! Victories for Vincent Luis and Flora Duffy

Czechia has just seen the greatest triathlon weekend in history. The best world triathletes were at the start in Karlovy Var on September 13. French Vincent Luis, who won the world champion´s title a week ago, confirmed his role of the favorite at the Karlovy Vary CITY TRIATHLON. In the women´s category, Flora Duffy, the double world champion, was the fastest of all. Among the Czech triathletes, the best ranking belongs Petra Kuříková (12th) and František Linduška (29th).

Karlovy Vary enjoyed the triathlon weekend with the greatest triathlon stars. The following ones entered the race: the reigning world champion Vincent Luis, the runner up Portuguese Vasco Vilaca, or Norwegian Kristian Blummenfelt, a world champion on middle distances. On the start list in the women´s category there were top 10 ladies – triathletes of the last world championship, including Flora Duffy, Katie Zaferes and Georgia Taylor-Brown.

Vincent Luis assured everyone of his world champ position in the men´s race starting from its swimming section. He also exited water and ran up the pontoon as the first man.

At the beginning of the bike section, a group of six triathletes, including Luis, Breinlinger and Schomburg, Vilaca, Dévay and Nener took the front. On the bike there was soon over one-minute gap between them and the remaining riders. After an unhappy collision in the last of the seven laps, only three bikers – Vilaca, Luis and Breinlinger – reached the transition area 2.

In the run there was a duo Luis – Vilaca leading. After some time the French world champion jumped off, keeping his 6-second split to the final victory ahead of the second Portugues. The fastest run of the day belonged to Belgian Jelle Geens, who came third.

“It’s really nice to race as the World Champ. Karlovy Vary is a great race and a tough one that really rewards the best swim-bike-runner. I was really happy with the group on the bike and it was a shame they (Kenji Nener and Mark Devay) crashed there with 1km to go, but it’s the kind of race I like; a quick breakaway on the bike and then a fight against the top runners,” said Vincent Luis

The first Czech to cross the finish line on the Theater Square was František Linduška, whom the full grandstand applauded to the 29th rank. Jan Volár finished 39th. Radim Grebík succeeded in overtaking Tomáš Zikmund and they completed the race 46th and 47th respectively. In total, 19 male athletes did not manage to finish the race. 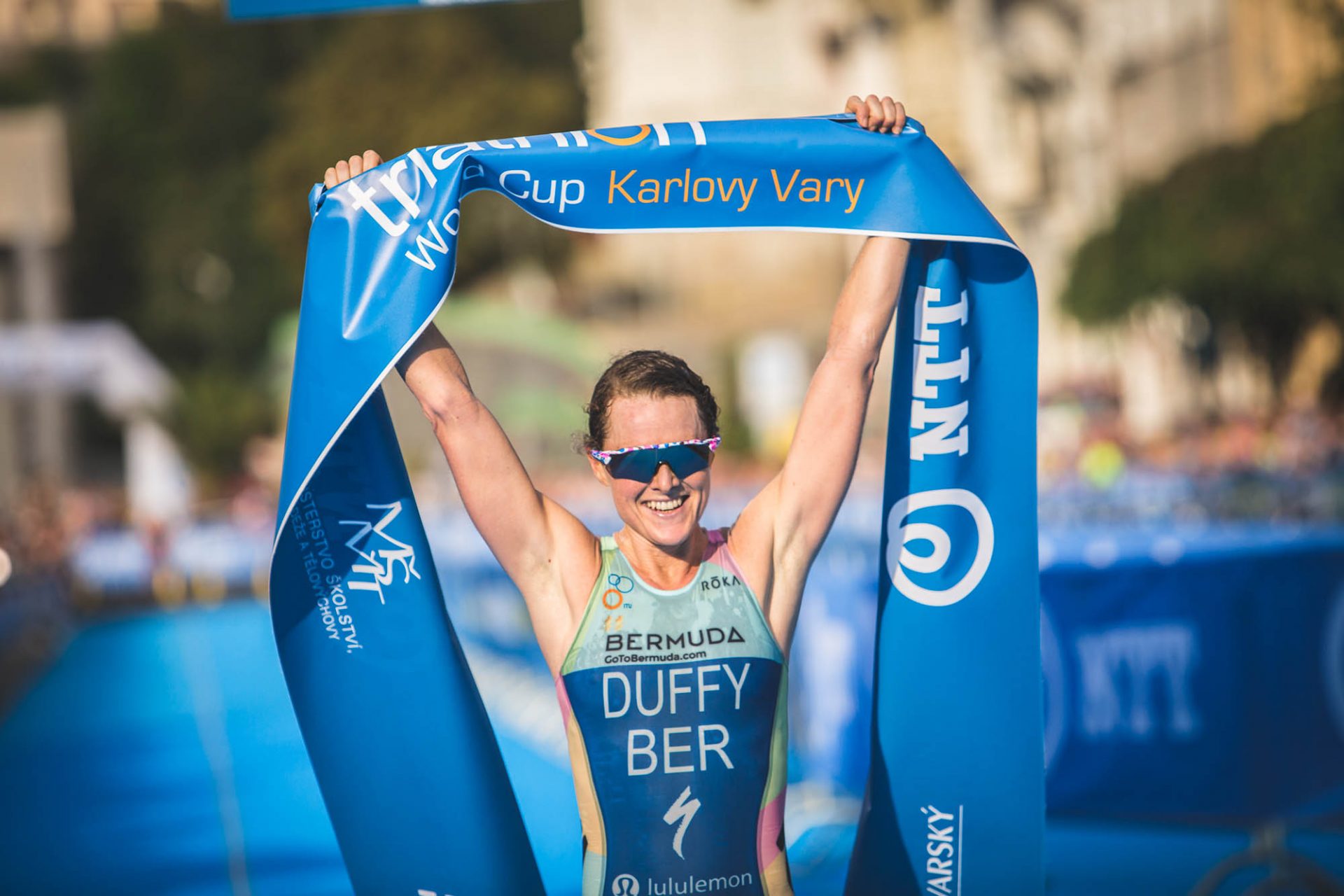 In the second part of the bike course the group of riders thinned down to one solo ride for Jessica Learmonth. Zaferes joined the chasing pack. Her high pace was too much Tereza Zimovjanová, who was unable to keep it and dropped down behind the third group.

Learmonth set off on the run course with more than 20 seconds in the lead ahead of six contestants. Flora Duffy, however, truly fired off and in the first of four laps she took the first position which with constant pace she defended to the finish line. The reigning world champion Georgia Taylor-Brown of Great Britain took the second place loosing 1:38 to the winner. Dutch Maya Kingma, the biggest surprise of the today´s race, surprised herself and the surrounds with the third place. Jessica Learmonth after the long time in the lead finally completed the race fourth.

“Wow! It was so hard, man that was a shock to the system,” admitted a thrilled Duffy. “A first Olympic distance of the year and on such a challenging course and with such a stacked field. Jess is unbelievable in the swim and I was just trying to recover from that for most of the bike to be honest, which isn’t easy on this type of course. I wanted to ride strong but not over-extend myself and the run just felt like survival. I’m just so thrilled to win, it has been a while since I’ve done it at this level and it’s a huge confidence boost and something I feel personally i’ve really needed.”

Thanks to her fantastic run, Petra Kuříková finished the race 12th under the blue sky and on the blue carpet. Tereza Zimovjanová after her spectacular performance in the first two sections ranked 25th and Alžběta Hrušková placed the 35th in the final results. 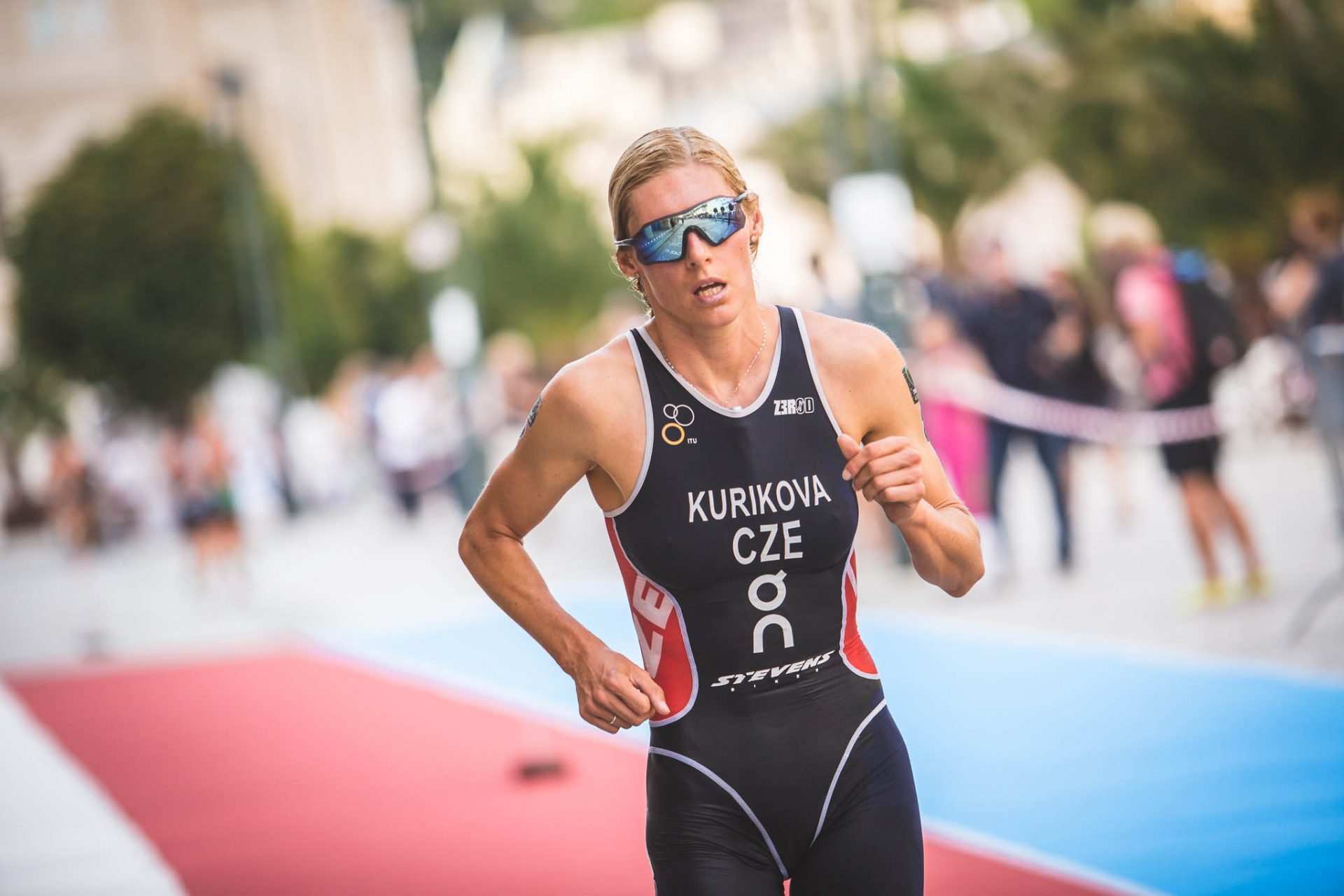