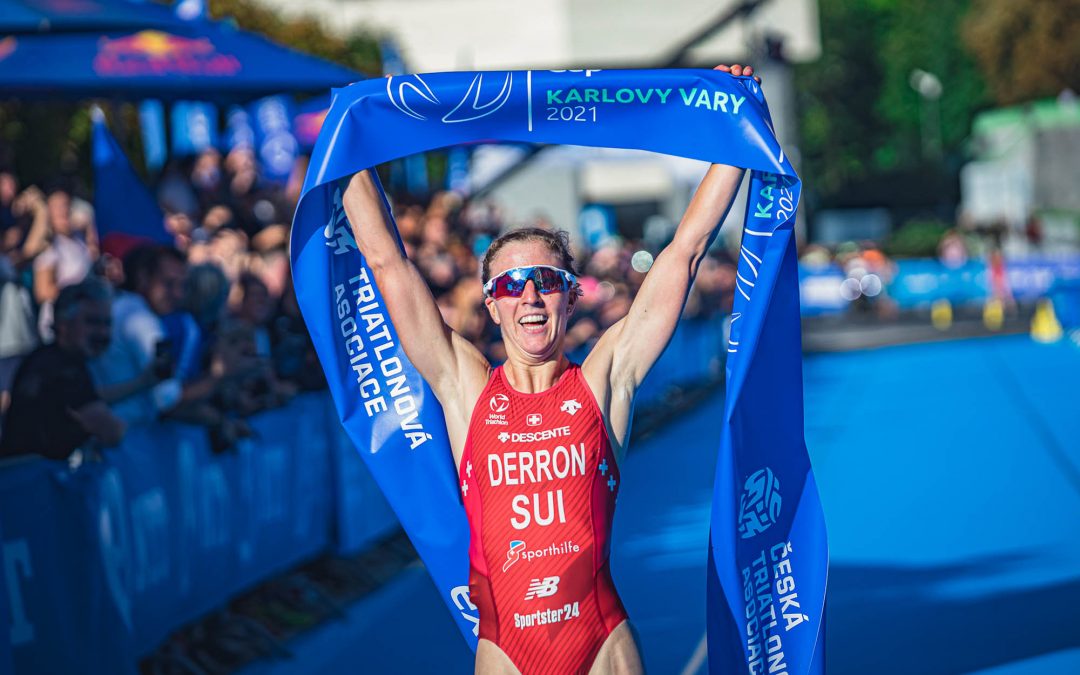 For the fifth time, the spa centre of Karlovy Vary has welcomed the prestigious Triathlon World Cup race! In a fantastic atmosphere created by thousands of fans, German Nygaard-Priester and Swiss Derron won.

The beautiful spa centre of Karlovy Vary welcomed participants of the Olympic Games, elite world triathletes and eleven Czech triathletes. Awaiting them there were the following distances: 1,500 metre swim in the Rolava Lake, 40 km of cycling with seven hard climbs to the Castle Hill, which make the Karlovy Vary race one of the toughest Olympic triathlons in the world. Finally, they completed a 10 km run along the colonnades along the Teplá River.

In the men’s race, Hungarian Márk Dévay was the first to run out of the water of the Rolava Lake. The best swimming performance from the Czech Republic was given by David Martin, who, like Jan Volár and Radim Grebík, reached the second cycling group of 25 triathletes. A four-member leading pack was riding with more than half a minute gap, with Japanese Hojo, Italian Crociani and Portuguese Silva in addition to Dévay.

Lukáš Červenka joined the group after the first transition are in 37th to 42nd place. He managed to catch up with the competitors in front of him during the race and in the second transition area he jumped down from the bike at the 31st position.

Tomáš Zikmund and Tomáš Kříž completed a challenging cycling track with seven climbs in the group to 41st to 48th position. At first, Jan Čelůstka also rode with them, but the experienced triathlete withdrew from the race during the cycling part. Filip Václavík, on the other hand, was able to group up with other two competitors. However, he wasn´t able to keep up with the high pace, so he arrived at the transition as the 50th.

In the running section, all four leaders paid for the cycling section, which cost them significantly more forces than the members of the large second group, and began to fall through the ranks. The victory was secured by a superb running performance by Lasse Nygaard-Priester of Germany, who finished in 1:53:31. British Grant Sheldon finished second and Hungarian Csongor Lehmann took bronze from Karlovy Vary.

“The absolute best and definitely the biggest victory of my career! It was only my second World Cup race and I managed to win right away,” Priester laughed after the race. “I enjoyed the race immensely. There was a great atmosphere, a very demanding track and there were a lot of fans standing alongside it.”

Of the three Czech competitors in the second group, Jan Volár, who took the 15th place, finished at the best position. “I haven’t done well here in the last few years, so I hope I broke the bad luck today. Swimming didn’t work out here again because there were many clashes in the water. And cycling is difficult for me in the hills when I weigh over 80 kilos,” said Jan Volár. “While it is true that some of the best people have been missing in Karlovy Vary this year, the starting field was of good quality and hopefully today’s result shows that I already belong to the wider world elite and if I continue like this, I will make my way to the podium in bigger races.”

Only eleven seconds worse was Radim Grebík, who finished 19th. “The running performance was negatively affected by the health complications I had, but I think I did quite well despite them,” Grebík said. “Compared to last year´s World Cup here and past races, this is a result and performance shift for me, for which I am very happy. I am also very happy with all the Czech results here.”

Of the four Czech female triathletes on the starting list, only one was targeted in the crowded Theatre Square. Two-time race winner Vendula Frintová did not start due to the illness. And the bad luck kept accompanying the Czech team during the race itself. Tereza Zimovjanová, who came out of the water ranked best, caught up with the second group of cyclists, but she fell while crossing to the spa centre and the damaged wheel rim did not allow her to continue.

Petra Kuříková rode her bike in the third group, in which she was ranked 17th-25th, but after the fourth of seven cycling circuits she withdrew due to a severe headache that had plagued her from the start.

Of the Czech triathletes, only Alžběta Hrušková remained in the race field, completing the swim course with a one-minute loss to the fastest swimmers. During the cycling part, she was around 30th place – she led a group of five competitors to 31st position into the second transition area. She finished 33rd. “The Karlovy Vary race is beautiful and I am very glad that so many people came to watch and cheer us up. However, at the same time I am terribly disappointed because I had nothing to take from today and I do not know how I got to the finish,” she said frustrated after her result.

The victory from Karlovy Vary was taken by the Swiss Julie Derron, who exited the waters of the Rolava Lake on the 15th position, but soon worked her way up to the leading group on the bike. It numbered 13 triathletes when the female triathletes arrived at the second transition area. She shot from this transition area as the eighth, quickly getting to the lead, where she was fighting the Italian Seregni, but soon she built up her leading position and ran the last lap on her own. Her winning time was 2:06:57.

From behind, Japanese Ai Ueda was appoaching her in the running section. Ueda demonstrated her running skills which she turned into a spectacular running performance that received a huge ovation and moved her from the 13th rank to silver! The bronze was awarded to Italian Bianca Seregni.

Complete results can be found here.